When it comes to local TV aerial installation Warrington, I have often been called out to homes where the occupant has just moved in and they have found that despite there being a new looking aerial on their roof, and multiple TV points in the house, none of the TV’s seem to work off any of the aerial points. The customer is usually at this point completely baffled as to why there would be absolutely no signal at all coming from the aerial system.

I would in cases like these check the signal in each of the rooms using my horizon H2 meter to see what if any signal is coming from them. If there is no signal at all, and yet evidence shows that there is an aerial on the roof, I will then look to see if there is a small plastic box at the base of the mast.

What is the mysterious box at the base of the mast?

If there is virtually no signal, yet there is an aerial up and looking like it is in good order, plus there is a small plastic box at the base of the mast, plus, the previous occupants have recently left, it can often times point to the answer being that at one time there had been fitted to the aerial system a masthead amplifier.

A Masthead Amplifier is a really useful piece of kit and one that I often use. The equipment itself comes in two parts;

The way it works is quite lever, yet simple. The splitter is used when a signal needs to be boosted and split at the same time, yet is in a position where there is no power, such as at the base of an aerial mast, or in a loft that has no power sockets. The splitter device is feed direct from the TV aerial, it then splits the signal at the same time boosting it up to 25 db. If it is a 4 way splitter it means that the aerial signal is evenly split and boosted ensuring that each relating TV point has a good strong signal. 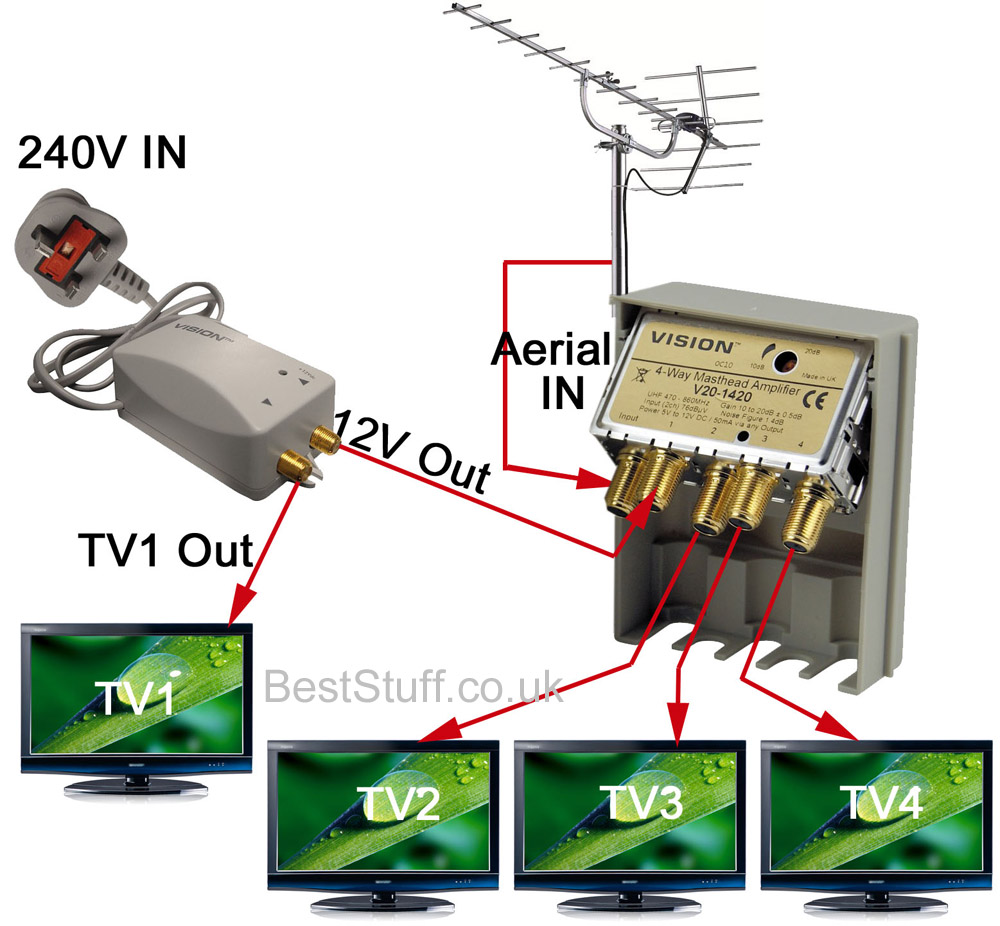 So how does the power get to the splitter?

This is the clever bit, since the power unit is in most cases plugged in behind one of the TV’s and a cox cable from the power unit is connected to the aerial socket. This then sends a small electrical current up the coax cable into the splitter device, wherever that is fitted. This then powers the amplifier and then sends the boosted signal back down that same coax cable back into the power device, from which another cable is connected from it to plug into the TV to provide the digital signal.

So, after explain all of that, the common mistake is for the previous home owner to have no idea what the power unit behind the TV is and is often mistaken for an amplifier by itself, so, when moving out they remove it leaving the other half (the splitter device) behind not realising they are part of the same system. Once the power unit is gone and there is no electricity going up to the splitter, it then will stop working completely and actually act as a block stopping any signal getting through from the aerial.

It is an easy fix once it has been concluded that a power unit has been removed from an aerial system that uses a masthead amp and by installing a replacement power unit. Once that kicks in the system will in most cases work with a strong signal being measured from all of the points connected to that powered splitter. Ever thought about switching to Freesat? Read this article for more info

This website uses cookies to improve your experience while you navigate through the website. Out of these cookies, the cookies that are categorized as necessary are stored on your browser as they are essential for the working of basic functionalities of the website. We also use third-party cookies that help us analyze and understand how you use this website. These cookies will be stored in your browser only with your consent. You also have the option to opt-out of these cookies. But opting out of some of these cookies may have an effect on your browsing experience.
Necessary Always Enabled
Necessary cookies are absolutely essential for the website to function properly. This category only includes cookies that ensures basic functionalities and security features of the website. These cookies do not store any personal information.
Non-necessary
Any cookies that may not be particularly necessary for the website to function and is used specifically to collect user personal data via analytics, ads, other embedded contents are termed as non-necessary cookies. It is mandatory to procure user consent prior to running these cookies on your website.
SAVE & ACCEPT